As published in the  to the Women’s Cantor Network newsletter, Summer 2022 (PDF version) 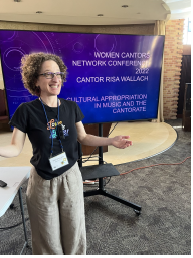 The impetus for my WCN Conference workshop, “Imitation through Music: Flattery or Cultural Misappropriation,” was a phone call from Ilana Axel 2 years ago, based on an email message I posted to the WCN listserv.

I spoke about the long history of white performers using, consuming, and benefitting from Black culture without paying royalties or sharing their profits.

Blackface was used for decades by white artists to promote their own careers. Mocking renditions of stereotypical Black affect and behavior were used by these performers to denigrate an already severely oppressed group that still has not received reparations from our country for centuries of free labor and violent repression.

We discussed the case of when Christian communities lead Passover Seders. Some participants felt that this practice was a kind of theft and used a highly valued and profoundly important Jewish ritual tradition without the history and background needed to bring its full meaning to bear. Others felt that the practice could be acceptable in certain circumstances with the right intention.

I hoped to open a conversation with attendees, guided by the following values:

Love of Jewish liturgy, music, and cultureChesed/compassion for ourselves as curators of the musical life of our congregations, while holding high ethical standardsSolidarity with historically oppressed and marginalized peopleSocial justice

Musicians as a whole tend to naturally draw on multiple sources from many cultures and contexts. This is especially true for Jews, who have lived in practically every country in the world over the millennia.

In the context provided by living in the United States in the 21st century, we experience and even participate in the weighted patterns of oppression and marginalization of African-Americans and Native Americans in particular. In order to resist those patterns, Ashkenazi and Jews who are not Black or Native American need to endeavor to bring awareness to our musical selections, while giving respect, attribution, and background when using music from these groups. We remain accountable as allies to our colleagues and to Jews of Color when we take these steps.

Other approaches: Organizations that provide musical programs and education might consider paying “royalties” to historically oppressed groups when using “Negro” spirituals or other music from the African diaspora, for example. When collaborating with choirs from outside religious organizations, we can make sure we’ve developed relationships with these communities, learned music together, and even taught them music from our own tradition (Debbie Katchko-Gray gave a wonderful example of this from her own congregation, where she had taught hazones (hazanut) to the African-American church choir that collaborates with their choir annually).

Gray areas: For example, when Ashkenazi Jews use Sephardi or Mizrahi music, or when we use a song in a “gospel” style by a Jewish composer, in some cases we need to use our own judgment and trust our gut. After mindfully considering the values and suggestions listed above, think about who will be impacted by your choice and make the best decision that you can.

I could not have anticipated the stimulating, rich, and heartfelt conversation that resulted from my presentation. Many thanks to those who attended and participated. Thanks to all who so very warmly welcomed me to my first WCN conference!